I don't belong in science

This is for the science lovers, the lifelong learners, the people who are in complete awe of nature and desire a complete understanding of the world we live in — and didn’t get a chance to pursue that dream. Maybe you had institutional or financial barriers, or you “made it” in and still felt like you didn’t belong.

Science, in my opinion, is suffering from the lack of people able to “make it” to the top. So many more people could be contributing to the world’s body of knowledge, and instead don’t, because they’ve been made to feel like they don’t belong. We as a society are missing uncountable new inventions, medicines, tools, because of the people who would make them are made to feel unwelcome. And this is just in developed countries — we are missing even more contributions from people in low-resource countries due to lack of access.

If anyone looks like they belong in academia from the outside, it’s me. I’m white, cis, femme-presenting, both my parents are PhD mathematicians, and my dad is a math professor. As a kid, I drew pictures on my dad’s chalkboard and “helped” my dad grade tests by adding up the per-question scores to a total. I knew what that life was like and wanted a slice of it so bad. And yet, I was still made to feel I didn’t belong.

“Grad school was the best years of my life” — Principal Investigators, aka the 0.45% of PhD students who so-called “made it” to the professoriate (figure below). 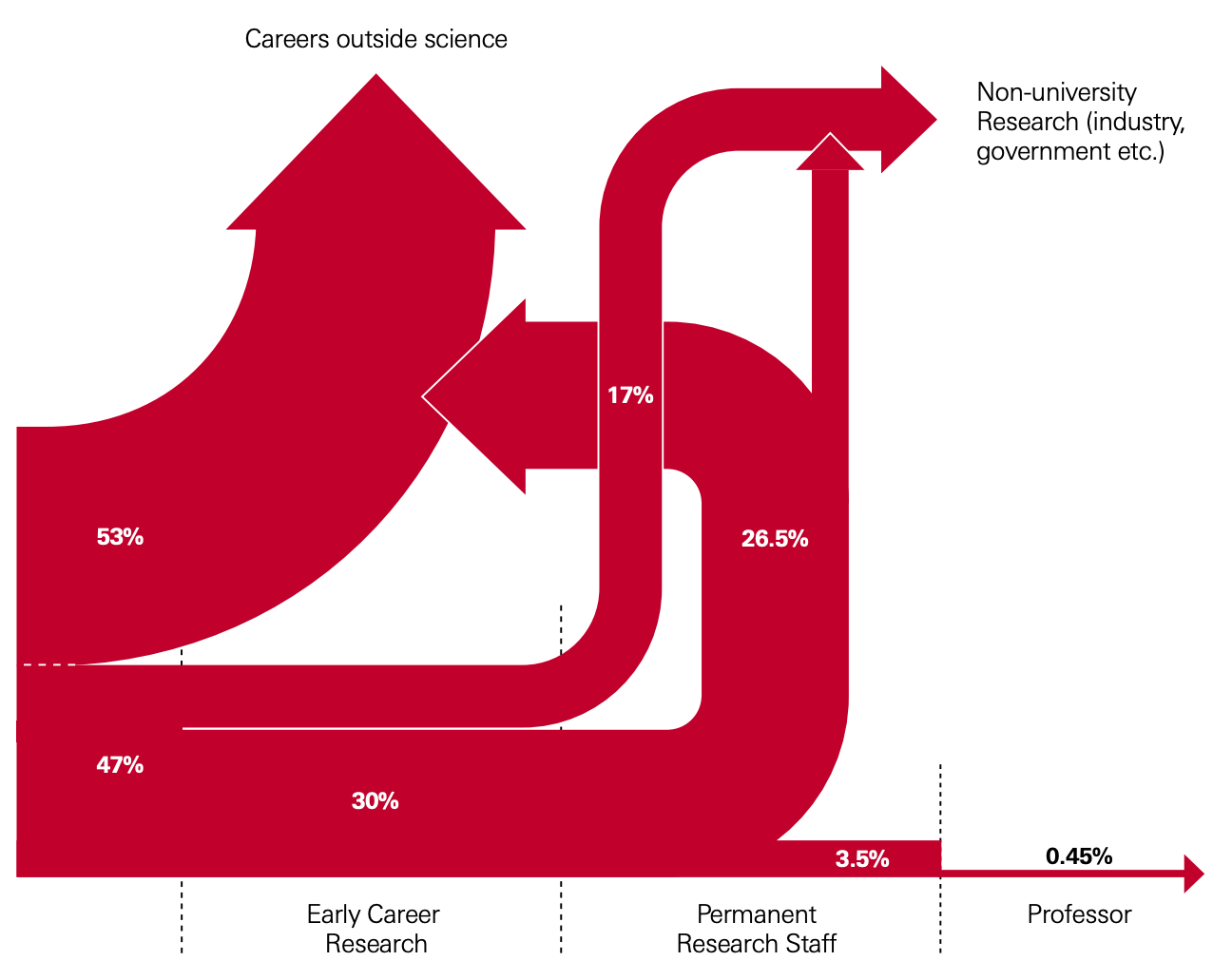 I kept hearing this phrase over and over and was really looking forward to grad school. I was so excited about joining a group of like-minded people who were also SO EXCITED about science. I hoped to stay up all night talking with my lab mates about science, our experiments, and the future of the field. Instead I got bullied, ignored, excluded, and felt like I didn’t belong.

Science isn’t for me

One time, I was deep in work with my headphones on, and completely didn’t notice the open-office plan emptying out. At some point, I lifted my head up and noticed the room was completely empty. I didn’t think much of it until everyone came back and said “hey, you missed the lab meeting.” Yes, it was my fault for not paying attention to the time, but I was surprised that nobody poked me and reminded me. It made me feel like it was intentional, to keep me out, and exclude me. I was surprised that nobody had the courtesy to at least remind me. At least 10 different people had the opportunity to say something, and nobody did. Why? What was I doing that made people not want to talk to me? What was going on with them that they felt they didn’t need to say anything to me? What kind of working environment is it when colleagues don’t look out for one another? When I’m the last one in a room, I still get bursts of “Am I missing a meeting?” panic.

I saw women get called “escorts” and implied to be strippers or prostitutes (btw, dancing for money take serious guts and sex work is work) for their hair and makeup, so I stopped wearing makeup to not befall the same fate.

My lab mate and I were collaborating on some code, and I asked them to use informative variable names (e.g. instead of c, use correlation or even corr). This was not inline with their values of doing things quickly, and caused conflict, enough that later on, I didn’t feel comfortable bringing up other issues that may have had a bigger impact on the project.

Another time, I was stuck trying to do something I hadn’t done before. I asked a lab mate for help, saying, “Hey, I’m doing gene ontology and I have these gene names—” they cut me off and said “Gene NAMES?! Why would you use gene NAMES? You need to use gene IDs.” Needless to say, I didn’t ask them for help again.

To add insult to injury and they made fun of my inspirational quotes. I like inspirational quotes. They make me happy and keep me motivated. They make me feel like me. But the environment around me told me I shouldn’t be like me. And yet I’m one of the lucky ones. I’m a cis, white, hetero, native English speaker, able-bodied person. I was only a few steps away from blending in and letting the harassment wash over me. I am ashamed for the times I didn’t speak up against sexist, ableist, and racist comments. I never want anyone to feel as useless as I was made to feel.

I felt miserable for years, and that misery is what drove me to contribute to open source software (OSS). I wanted to make other graduate students’ lives a little less miserable. OSS finally made me feel useful. I could write a blog post demoing a cool tool I made and suddenly people around the world would thank me and ask questions, a stark contrast from my lab environment where I felt dismissed and ignored.

When advisors respond to complaints about grad school with, “grad school was the best time of my life,” or “my PI was worse because …” they are dismissing the feelings of the person they are talking to. Advisors may not recognize they are part of a tiny percentage of PhDs that so-called “made it,” and are woefully unprepared to mentor students into non-academic jobs. I felt an underlying sense of failure, an underground river of despair for myself, if I went to an industry position instead of an academic position.

I deeply apologize to everyone I hurt through wearing a Quinceñera dress for my PhD graduation. I never meant to alienate others, and yet I did. I wanted to have a lighthearted, fun PhD defense, after all the unhappiness I felt, and I was crushed to learn that I made others feel as unwelcome as I did. The many angry messages drove me to suicidal ideation. I felt like a fraud, a hypocrite that claimed to “lift all boats” and yet I drove people out with my actions. I donated the dress to a family that would use it for a Quinceñera, and have been more thoughtful of my actions, as best I can.

Graduate students and postdocs, the footsoldiers of academia, are stuck. They are stuck in a position where they are completely dependent on their advisor to advance their career. This level of hierarchy and dependence is a vestige of the apprenticeship model for science, which, when administered well with a dedicated mentor, are a phenomenal method of knowledge transfer.

While postdocs are still dependent on the advisor and their project to get publications out, PhD students are even more dependent. They are floating on a paper raft in a sea of academia. Common advice might be, “Why don’t you just switch labs?” Switching labs can add time to your PhD, since you’ll have to start a completely new project from scratch. You could use some of the skills you built in the old lab, but it’s generally frowned upon to switch labs unless extreme circumstances required it. For example, the cases I’ve heard of are your PI was accused of harassment or scientific misconduct, your PI died, or you really didn’t have a “good fit.”

Speaking from experience, I felt completely trapped in my PhD. I was in a long-distance relationship with my now-husband. The weekends we saw each other made me feel alive. He was my light at the end of the tunnel, and I felt I couldn’t afford to switch labs and add any more time to how long we’d be apart.

I have heard far too many “your mom” and penis jokes to describe academia as a “professional environment.” The jokesters were supposedly people I should look up to, but they knew they faced no consequences, they wouldn’t lose their power (their job, project, or paper) if they made other people feel unwelcome. Unfortunately for me, these “bad apples” were extremely productive from a scientific perspective and were never punished for their bad behavior. To be clear, I do not blame the PI — they had their own incentives to follow and maybe were working on the skillsets to deal with conflict resolution. I am working to let go of my grudges, and instead, I wish them well. I thank these people for helping me see how important it is to be welcoming in every moment. I want to be a beacon of light in science, and make it a welcoming place because anyone could be the one to discover that new mechanism, but if their environment doesn’t nourish them, they may not discover it.

If this happened to me, who has many privileges in academia, then just sit and think about the many more people who were pushed out by thousands more paper cuts. Consider how much more advanced our society could be, with expansive knowledge of the natural world, cures for diseases, and life-saving technology that could have existed had those people not left science.

Discoveries are for everyone

For example, the mammalian target of rapamycin (mTOR) protein, which is fundamentally important for a huge variety of biology, including cancer, muscle growth, and neurodegeneration, was famously discovered by the sexual harasser David Sabatini. I read the David Sabatini scandal with disgust. As horrible as it is, I can completely imagine the things he did, asking female grad students about their sex lives, inviting female scientists to his hotel room, and choosing the more attractive female undergrads to work in his lab. To my understanding, this was an “open secret” in the biology community, and only now is something being done about it.

In my opinion, mTOR could have been found by anybody. That discovery was there for the taking and if it hadn’t been Sabatini, it would have been somebody else. The idea of protecting someone due to their “genius” sickens me because it communicates that only that one “genius” is capable of discovering anything worthwhile, while the rest of us peons are only looking at “unimportant” questions. Science is such that infinite research questions exist, and yet a scarcity mindset persists due to only so much funding, only so many grad students, and only so many “good” postdocs (the rest fled to industry, where they are paid 3-5x better than academia, typically for fewer hours per week). If anything, academia should be a place of infinite mindset, where any idea can be pursued, and instead, only “fundable” projects are pursued. “Fundable” projects mean that to pass a grant review board, they often do not take any risk of venturing into the “adjacent possible” but instead stay within “possible”, and science as a whole suffers and stagnates.

What can be done?

I don’t know how to fix science as a whole. It is a complex question of funding, environment, and accountability. Some things I think could help the footsoldiers of academia – PhD students and postdocs are the following:

I feel so scarred by Academia. Stories like mine are unfortunately all too common, and I wish they weren’t. I wish Academia was actually like the idealized place it’s supposed to be — where you study whatever feeds your soul, not what feeds the grants. Where everyone is so damn excited just to be there to have the privilege of studying the natural world — the wondrous world we live in — and be part of a community that shares in the awe of nature.

Writing this was cathartic, and I felt the need to speak up. If this resonated with you, let me know at olga@olgabotvinnik.com

Time is Citations: How I Plan My Days